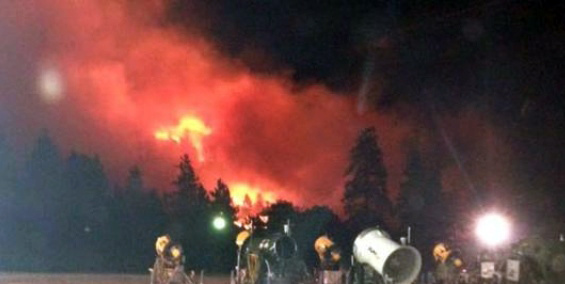 Mountain High had a fire scare the other night but came out relatively unscathed thanks to the hard work of local firefighters and employees.  Photos show the fire starting just before 10pm and burning up through an area just off Highway 2 towards Mountain High’s North Resort, formerly known as Table Mountain.  Though the fire got close, no structures were damaged and Mountain High’s East & West Resorts were never threatened.

Roughly 600 people were evacuated from Table Mountain Campground and Camp “Care”, a local summer camp, as three LA County helicopters and one US Forest Service copter with night vision doused the flames.  Strike teams on the ground consisting of engines, hand crews, and bull dozers helped knock down hot spots as well to contain the blaze.  Mountain High assisted with personnel, staging areas, and water from its two snowmaking reservoirs.  New firefighting crews were deployed this morning and are now securing what seems to be the end of the threat.

Though there was no structural damage, officials are asking residents, sightseers, and disc golfers to stay out of the area so crews continue cleanup efforts.  Mother Nature has contributed as well with light rain and thunderstorms signifying the continuing build of this season’s El Nino.

Says Ben Smith, Mountain High’s General Manager, “It was a long night but a fast one.  There were helicopters flying until early this morning and we helped wherever we could.  Thank you to everyone who helped prevent what could have been a terribly tragedy.”

Mountain High is located in the San Gabriel Mountains just off Highway 2 in the historic Big Pines region of the Angeles National Forest.  The For more than 80 years winter enthusiasts have flocked to Big Pines making it one of the oldest, most historic winter destinations in Southern California.  Learn more here.

Mountain High would like to thank the firefighters and employees who worked tireless last night to keep the flames at bay, saving this piece of historic culture and current destination for winter sports.