Mountain High is proud to announce two members of its newly formed professional snowboard team medaled in the Snowboard Street event at the 2012 Winter X Games in Aspen, Colorado.  Ryan Paul took Silver with his impressive technical tricks including a 270 onto the Jersey Barrier to 450 out, a gap to 50-50 on the down-flat ledge to a backflip out, and a Cab 180 to 50-50 on the ledge to backside rodeo out.  Nick Visconti held off some series competition to win the Bronze with his smooth style and hammer tricks including a hardway cab 3 on the down rail, a 270 onto the curved C-rail, and frontside 50-50 to 180 out on the massive cargo container feature.

“X Games was so awesome.  I’m super stoked on how it all went and can’t wait to get back next year,” says Ryan Paul. “Mountain High has been a great training ground to learn the tricks that have helped me excel as a professional snowboarder.”

“It was an amazing once-in-a-lifetime experience that I’m excited to participate in annually,” says Nick Visconti. “I’m thankful and feel blessed to represent the core side of snowboarding in the X Games for my sponsors including Mountain High.”

On Sunday March 18, 2012, X Games medalist’s Nick Visconti and Ryan Paul will team up for a signature event at Mountain High dubbed “The Great White Park Attack.” This will be a great opportunity for snowboard enthusiasts to come out and meet the professionals who took home Silver and Bronze from the Winter X Games in 2012.

Look for the entire Mountain High professional snowboarding team throughout the season as they film for the Drive In web series and their first full-length snowboard movie “Los Angeles” that will be released in the Fall of 2012.  For more information or to schedule an interview, please contact John McColly at 760 316 7803 or john@mthigh.com. 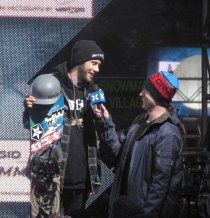 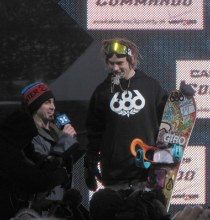