Mountain High is proud to announce its latest snowboarding game, the Cholula Triple Air, available on both PCs and Macs.  Ever dream of flying over 70 foot kickers throwing back to back switch Rodeo 900s, Double Back Flips, and Triple Cork 1260s?  Well now you can!  Mountain High has made it easy with their new Cholula Triple Air game and, best of all, it’s FREE!  Just click the link to start playing now http://mthigh.com/archive/pages/MyTP/index.html

The Cholula Triple Air game is branded with signature graphics and competitors have the ability to customize their players; male or female, regular or goofy, pants, jackets, hats, goggles, and more.  A short tutorial is recommended to get familiar with the controls and then it’s on to the big event.  Almost anything is possible and, once at the bottom, riders have the ability to replay their runs and take snapshots of their favorite tricks.

Mountain High will be hosting the game through Monday, February 6th, and then awarding the top 5 competitors who post their high scores on the resort’s Facebook page at http://www.facebook.com/mthigh with free lift tickets.  There is no limit to the number of times you can play and there is no cost to enter.  Try it now!

And then don’t miss the REAL Cholula Triple Air in memory of Chuck Allen this Saturday, February 4th.  $20,000 is on the line and this year first place takes home $5,000 in the Men’s Snowboarding Division, $3,500 in Open Skiing, and $2,000 in Women’s Snowboarding.  The Cholula Triple Air is unlike any other big air event of its kind and for 14 straight years, riders like Shaun White, Zak Hale, and Keegan Valaika have competed.  Instead of one big jump, skiers and snowboarders must tackle three humongous kickers making their landings and execution crucial.  Riders are scored on their best of two runs and the top 10 finishers make their way to the finals where awards are paid out to 5th place.

The Cholula Triple Air has been upgraded to a 3 star TTR (Ticket To Ride) event this year which means competitors will earn points towards their overall worldwide ranking.  The TTR standard is what competitive snowboarders use to rank themselves against each other, and earn entry into events like the Grand Prix and the Olympics.

Says John McColly, Vice President of Sales and Marketing, “This is our biggest event of the season and with $5,000 on the line for first place, you know there is going to be some heavy competition.”

This is an open event but space is limited so competitors are encouraged to register early Friday, February 3rd.  There is no pre-registration at this time.  Below is the complete listing of event details including the prize purse breakdown.  Don’t miss Mountain High’s richest single-day event, the $20,000 Cholula Triple Air…an event that is as great for spectators as it is for competitors.

Special thanks goes out to Cholula and all our sponsors including Jarritos, the USASA and TTR for making this annual event possible.  For more information or to schedule an interview, please contact John McColly at 760 316 7803 or john@mthigh.com. 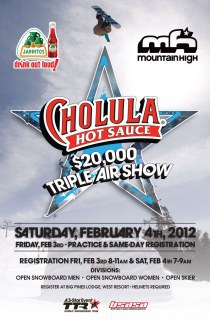